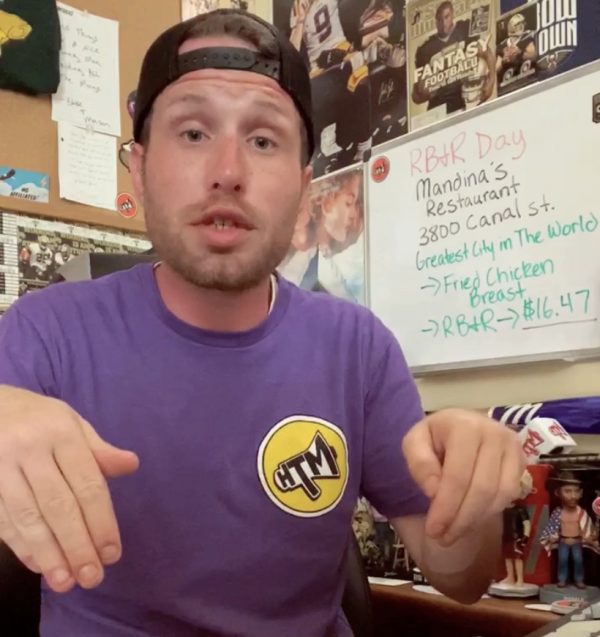 The seventh location on RB&R Day, Mandina’s Resaurant on 3800 Canal Street. One of the most seasoned spots in New Orleans grub history.

Bring up Mandina’s around me and you will feel that vibe bounce off my soul. The pink house has been sitting there since 1932. True consistency, and longevity. The menu is versatile, and the drinks are stiff as piss. It was a pleasure to pick up such a traditional meal on a Monday in Nola.

The RB&R was stellar. We on Canal Street, guys…Great seasoned taste, had the ham doing it’s job, and the chicken was above level chicken. There is a difference in that game. Chicken talks, pal.

Mandina’s obviously chooses to stay premier in the chicken game. The skin is falling off of it because I had personal demons I wound up fighting before I filmed this segment. Apple decided to say my phone had no iCloud storage. They casually forget charging me $2.99 twice a month for extra storage. A clean slap in the face by the boys and girls in California.

1- Willie Mae’s Scotch House
& it’s not even close. They doing it that big over there with the RB&R.

2- Lakeview Brew
Shout out Anita for holding this plate down. She’s slanging latte’s, pie’s, and hot plates all day long. They still found a way to have a plate of RB&R that will make ya cheese. Anita is the greatest barista in the world.

3-Sammy’s Food Service
An incredible venue, great experience, and right in the heart of Nola on Elysian Fields. Sick ass menu on those folks. You can stop here at any minute. Them catfish strips, bruh. Stay woke as fuck on them hitta’s.

4- Larry Morrow’s
Uncle Larry stays at #4 this week and deservingly. The dude’s fried chicken matched with their red beans and rice is nothing short of satisfying and impressive when you consider the chicken quality. Still rated HTM’s #1 fried chicken in the city of New Orleans.

5- Mandina’s Restaurant
This is where we slide Mandina’s after a beautiful lunch today. However, I would’ve liked them to be only the second of seven places with cornbread included on the side. The price was expected, and the quality was as usual, but no cornbread was just a community let down for me.

Desserts (very significant that you don’t say you’ve had enough)
– Milkyway Pie (stay real, real woke)
– Any of their specialty desserts are usually good. They are most likely gonna be on a black chalk board in the middle of the restaurant.

6- Neyow’s
Loved the atmosphere when I walked into Neyow’s for pick up a few weeks back. The people were really nice, but almost too much on the fucking walls. The food was what I would call above average. The chicken had it’s own thing going on with some black pepper, and the RB&R just slipped my memory on quality. Price was on point, and I should probably go back.

7- Dolly’s Deli (Ragin Cajun’s)
Surely they are getting another chance after giving me a phenomenal deal with price on a plate of red beans two weeks ago. My only complaint was that it was too buttery. My girl in there tells me every day she got me and is working on that. In fact, she told me today “I got them beans with less butter baby” and I told her I would come later and didn’t. I’m in a tough position guys.

Tons of mail to package. See y’all next time.